I'm Max Coburn (Maxo), and I'm a 20 year-old junior Studio Composition major at SUNY Purchase.
Because I'm truly inspired by the sounds and composition of the 16-bit era of gaming (particularly Super Nintendo), I've taken under a 9-volume game music simulation project.
The rules are pretty simple: I'm only allowed use of sounds from Super Nintendo games (plus Logic Pro's Ultrabeat drumkits, just to give it a little extra thickness). There will be 5 tracks for each volume, which will coincide with their respective artwork (going bottom up). The individual songs will be short loops, looped twice through before a fade-out. All art and music is done by me.
The sounds (soundfonts) I use are a conglomeration of various Super Nintendo soundfonts which were painstakingly created (not by me), and made available on the internet. The two sources I use the most often are Dave Harris's library of soundfonts and Setzer's SPC (scroll down a little). Drag these soundfonts into the sample library of any DAW, and they should appear there the next time you start it up.
I began work on LEVEL MUSIC on October 13th, 2010. I'm currently using only Logic Pro 8 for this project, assisted by a MIDI keyboard.
I finished the numeral version of LEVEL MUSIC on August 3rd, 2011. From here, I had originally planned to reorganize all the tracks and develop a game that incorporated everything into it, however the idea I had for a game proved to have a life of its own, and I've opted to give it its own soundtrack when the time comes.
I'm now in the process of continuing the Level Music tradition by creating an additional 26 (yes 26) volumes of Level Music to cover the alphabet as well! This means that by the time I finish this segment, there will be a total of 175 tracks of Level Music!
Thanks for taking the time to check this out! There's a link to your left where you can listen to every track I've completed so far! You can also download every volume of the original Level Music (individually or as a whole) directly below you!

Hey all! It's been awhile since the last update. I have some game changing news to bring everyone. Originally I had said that I was planning on turning Level Music into a game. While I am intent on making a game and have already begun developing the story and details, I feel as though the game itself would be better off with its own original soundtrack, rather than drawing on what I've already written. It was a cool idea, but I didn't predict how much filler I would have to incorporate to match the game to the music. However, now that I'm not as worried about postponing the Level Music project for the production of a game, I present to you:

I'm planning on an additional 26 volumes of Level Music!  I will release two volumes at a time now, meaning 10 songs per batch, but I'll release a letter from both halves of the alphabet, rather than two consecutive letters.  Level Music A and Level Music N will be out by next week, after which I'll begin work on Level Music B and Level Music O, and etcetera.
Expect more of the rad-ness of the original Level Music!  I'm super psyched to be working in this medium again, and I hope you are too!

More details on the first release will be up shortly.

One of the aforementioned additional levels!
Posted by Maxo at 9:16 AM 0 comments 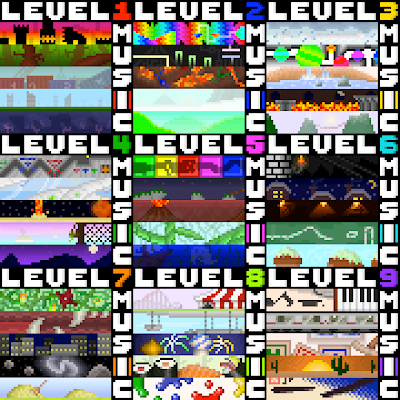 The beta version of LEVEL MUSIC is complete. It includes 9 volumes with 5 tracks each.
After this, I plan to rearrange the existing tracks into STAGE > LEVEL format, and add supplemental tracks to fit the new organization. This will include:
-More Level Themes
-Boss Themes
-Menu Themes
-Fanfares
-Anything else I see fit
But for now,
The track listing and links are as follows:
LEVEL MUSIC 1:
http://www.mediafire.com/?​a3c6ere6v4s7h31